Wouldn’t Change It For The World

THERE ARE MANY DIFFERENT ROUTES INTO BECOMING A FOSTER CARER.. FOR HARRY, IT WAS A CHANCE MEETING WITH REPRESENTATIVES FROM FOSTERING AGENCY. WHEN THEY VISITED THE COMPANY WHERE HE WORKED. THAT WAS TWO YEARS AGO. HARRY, 44, ADMITS HE HAD NEVER CONSIDERED THE IDEA OF CARING FOR CHILDREN BEFORE THAT DAY. AS A SINGLE MAN WITH NO BIRTH CHILDREN OF HIS OWN, FOSTER CARING WAS NOT ON HIS RADAR. SO WHAT CONVINCED HIS TO APPLY? 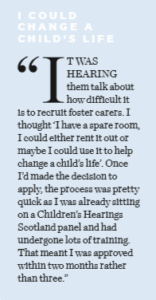 SOCIETY’S ATTITUDES and assumptions present an ongoing challenge, as Harry explained: “If they see us together, people naturally assume I’m dad, or they assume that you have a wife somewhere who is ‘mum’. People don’t naturally make allowances for different family set-ups. It concerns me the impact this has on looked after children as they are already having to deal with so many different dynamics.” 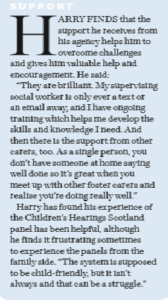 I WOULD’NT CHANGE YOU FOR THE WORLD, BUT I WOULD CHANGE THE WORLD FOR YOU.

AFTER TWO years as a foster carer, Harry says he can’t imagine life without it. “The children become part of you and your life, everything you do revolves around them. The rewards are phenomenal. You see the children start to trust you and care about you, you see their personalities begin to emerge. And you start to see the changes you make in their life. You can’t put a price on that. It is amazing to see them settling down, building friendships, doing well at school because of the support and care you’re giving them. You may not immediately realise it but they are doing something great because of you. You’ve changed someone’s life for the better and that’s incredible. I wouldn’t change it for the world.”

HARRY BALANCES foster caring with a part-time job as a youth co-ordinator for a voluntary organisation and studying for a Diploma. It can be a difficult juggling act sometimes but he says the secret is being well-organised, with breakfast clubs and after school clubs when necessary.